PILOT is definitely one of the most reliable companies in the field of writing. With particular eagerness, when I was asked by Mr. Zafiriou, to make an article about this very special implementation of Pilot, my thought went straight to the period of time I have been using it. About 1.5 years of use, without any problems. It is also the first conclusion, without hesitation, about this particular pen.

JUSTUS is a typically Japanese pen. At first glance, out of the box, its design refers to other Japanese implementations, such as Sailor Pro Gear. But, after the first spontaneous impression, a careful look will easily establish that this particular pen cannot be considered only classic. Starting from the admittedly long body (oversized), one notices its unusual textured texture. In all this time of use, not once did I have to resort to a cloth to polish it from fingers (I don't recommend writing after a meal with skewers though...). 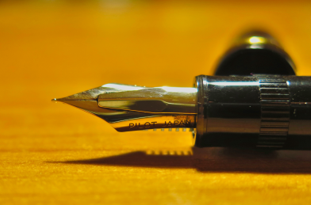 Then, as soon as the lid comes off, the fun begins. The nib (in my case fine), 14K gold, is narrow relatively large, arbitrarily I rank it perhaps for No. 6., which immediately stands out with the presence of a stem above the nib, which is adjustable and responsible for the conversion of the nib from a soft texture (when the stem is inside the pen body position S of the rotary regulator located at the base of the nib) to the hardest texture (position H). This particular type of nib, as far as I know, is no longer in production by any other company and is enough to qualify the pen as unique. Maybe some people find it a bit retro.

In practice, the pen is characterized by excellent balance, even when capped, although this makes the pen excessively long and narrow. I personally don't remember even once using it with the cap on the stem. The pen is highly well-designed and exudes a sense of solidity that doesn't wear off no matter how long it's been used. Finally, in terms of design, the pen accepts ampoules and a pilot converter (Con-70 converter), with which the amount of ink is considered very satisfactory.

On paper: very quickly it becomes clear that the adjustable nose is not flex. If you're one of those looking for a big gradation in writing thickness depending on the pressure applied, I might disappoint you. 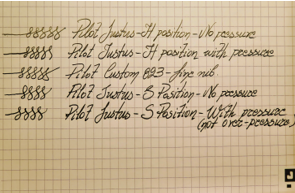 It is no coincidence that Pilot has in its range the Falcon, which is launched as a flex. In the case of the Justus, I would say that the nose, ranges between a rigid to semi-flexible operation. Especially when the nib is in the hard position, and without any pressure, the nib performs like a Japanese fine fine. Compared to its “cousin”, the Pilot Custom 823 – Fine nib, the Justus is barely noticeable, a bit drier while both produce almost the same line thickness. However, once the stem is shortened via the rotary adjuster, the tip starts to become more flexible, more bouncy, resulting in thicker to medium lines (always by Japanese standards). Very soon, I think one finds the ideal setting and has like an ace up his sleeve, the ability to have something a little different whenever he wants. To the question to whom is this particular pen addressed? For those who want to have the ability to change from fine to medium fine in one pen, without changing pens without problematic behaviors (hard starts, skipping). Finally, in terms of the pen drying out after a period of non-use, 2 weeks as an average I think is pretty good.

For its money, the pen is flawless. The real question is which pen is the best? I will answer that personally a pen is in the upper echelon of my personal preferences when it makes me write better or ..... like no other. With this particular pen I experienced the following: I remembered my student years, with the rapid writers in the drawing. I don't remember how, but suddenly I started drawing again, using that particular pen. Its accuracy is characteristic and it fully satisfied a long-forgotten sensibility of mine. That alone is enough to make me not only want to part with her, but to ... enjoy her.

In the end, I couldn't do two things for Justus:

1. To understand what the name Justus means. Maybe she means Pilot, just us, in the special relationship that a friend of writing can develop with his pen... an interpretation that I really like and I will stay there.

2. I haven't found anything to dislike about this pen.

Register and manage your orders easily and quickly

Register and manage your orders easily and quickly